My dog is nuts. But my husband and I are apparently silly crazy, too.

For several months now, the dog has been going completely spare every time my husband said goodnight to me. Our usual weeknight habits involve him going to bed a lot earlier than I do because I go to work once everyone else is in bed. So he kisses me and says goodnight. And the dog goes ballistic whining, barking and jumping around, circling his feet and generally make a nuisance of himself.

This has been really annoying my husband and I.

So last night, as a half-joke, I said we should start saying something besides "goodnight". I suggested banana and laughed. My husband went with it and started saying banana instead of goodnight. We had a good chuckle, called it our "safe word" and laughed more as he went off to bed and I started working.

Tonight, we really put the "safe word" to the test and he actually said "banana" instead of goodnight when we went through our nightly ritual. And the dog took no notice of us at all! He completely ignored us. Apparently, the word works, silly as it sounds.

So now, in this house, at roughly 10pm, banana equals goodnight. All because our dog is dumb. 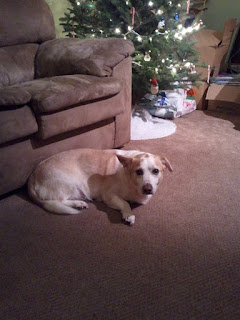 Happy Holidays!
Posted by Isabo Kelly at 11:13 PM No comments:

Isabo Kelly
Award winning author Isabo Kelly has a gypsy soul, which she’s indulged wholeheartedly over the years, living in Las Vegas, Hawaii, Germany, Ireland and New York. There’s no telling were she might end up next (though Italy keeps coming up in conversation). After finishing her Ph.D. in Zoology in Ireland, Isabo buckled down to concentrate on writing. She’s published numerous science fiction, fantasy and paranormal romance novels, short stories and novellas. Isabo currently lives in New York with her family, and she love to hear from readers!